By the end of 2020, renewable diesel capacity is expected to reach 50,000 barrels per day according to Turner, Mason & Company (TM&C), a leading energy consulting and advisory firm, and is expected to grow at a 33% CAGR to over 300,000 barrels per day by the end of 2025.  This growth projection is based upon TM&C’s industry knowledge of renewable diesel facilities that are currently operational, under construction and newly announced.  In addition to the current renewable diesel projects under construction or newly announced, TM&C is aware of numerous other projects under consideration by various companies.  Should all these projects proceed, the U.S. market will experience fluctuations in the supply and demand of renewable diesel.  TM&C is actively monitoring these developments and providing updates of their outlook continuously.  The expansion in capacity is being driven primarily by new environmental regulations says Cinda Lohmann, P.E., Vice President of the Fuels Regulatory Practice at TM&C:

“The low carbon fuel programs in California and Oregon are providing the primary incentive for growth of U.S. renewable diesel production.  Turner, Mason & Company expect the regulatory incentives to hold strong as other regions across the U.S. consider adopting low carbon programs as a mechanism to achieve regional climate goals.”

Current U.S. renewable diesel production is primarily located in California, Louisiana, and Washington, with new production planned in Wyoming, Oregon, Texas, North Dakota, and New Mexico.  Renewable diesel imports are mainly from Singapore.   Additionally, new low carbon fuel programs being considered by other states include New York, Colorado, and the Mid-West states.  All these factors combined point to double-digit growth and an incremental production of nearly 6x existing capacity by 2025. 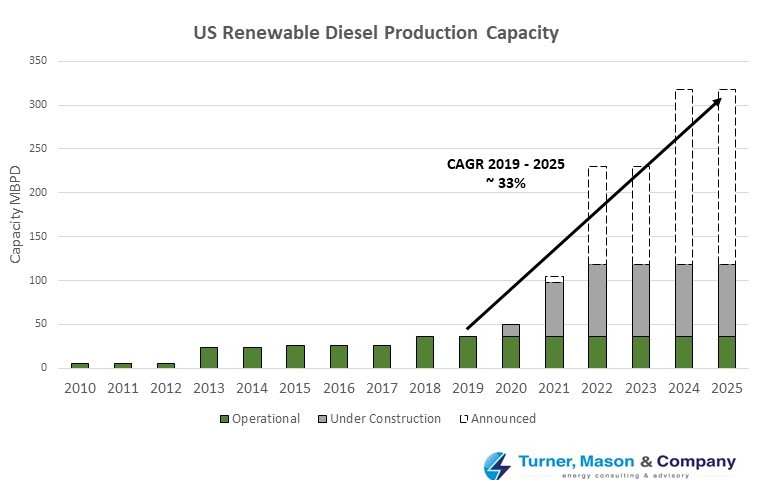 As renewable diesel growth continues to gain traction in the U.S., it is signaling both inbound and outbound growth opportunities for the rail industry.  PLG Consulting projects nearly a 1:1 inbound to outbound opportunity bringing feedstocks into refineries and the finished product out of the plants.  The biggest advantage for the rail industry is that renewable diesel can be distributed using the existing railcar distribution infrastructure without requiring any specialized storage tanks.

Renewable diesel is different than biodiesel

What is renewable diesel and how is it different than biodiesel?  Renewable diesel is an advanced biofuel that reduces greenhouse emissions ~80% while meeting the same ASTM D975 specification as petroleum diesel.  It is essentially a “drop-in” biofuel that requires no changes in engine, can be blended, and can be run in existing pipelines.  Renewable diesel can be produced by triglyceride feedstocks including plant oils, animal fats (virgin and recycled), and used cooking oils.  The process consumes hydrogen and liberates water, and propane is also made during the process.

The cost of the triglyceride feedstock is the largest contributor to the cost of production.  Below is a chart describing the differences between renewable diesel and biodiesel:

Producers of renewable diesel face significant supply chain and logistics considerations when making the strategic decision to compete in the renewable fuel/diesel market.  There are many factors to consider primarily focused on the issues and challenges in optimizing inbound feedstocks and outbound finished product to the growing low carbon fuel (LCFS) markets.  As U.S. refiners are making significant investments to capitalize on this growing market and their ability to secure funding to build additional capacity, here are some key strategic decisions critical to their success:

Many refiners and producers are partnering with supply chain and logistics experts to ensure their strategy enables efficiency and cost competitiveness as a key aspect of enabling market adoption.

Combining inbound and outbound opportunities, PLG Consulting estimates each 100 MM gallons per year of RD refining could represent ~7,000 incremental carloads, with geography, vessel, and pipeline alternatives favoring the Western railroads. While market share and pricing leave open a wide range of outcomes, early indications are this could be a $100M to $500M annual market for railroads to carry energy products.  This would represent a solid incremental opportunity for the Western carriers, whose combined revenues were ~$48B in 2019.

There are many opportunities for producers, consumers, and investors in this growing market.  If you would like to learn more about this dynamic market please download our Renewable Diesel Market Overview presentation authored by Dean Piacente, PLG Senior Consultant.

PLG Consulting is at the forefront of the transformation of the global liquid fuels supply.  PLG Consulting has been involved in the renewable diesel space and its attendant issues and challenges.  Our experience and expertise are helping some of the leading companies ensure a solid market position by optimizing their supply chain and logistics to the low carbon fuel standard (LCFS) markets. To learn more about this transformation and how we can help, contact us today.

Turner, Mason & Company provides technical, commercial, and strategic consulting services to clients globally in the crude oil, midstream, refining, refined products, and biofuels industries.  TM&C has been active in the renewable diesel market for the past decade and is presently analyzing future supply and demand of renewable diesel, quality and sustainability of feedstock supply, and the economics driving existing plant conversions and new builds.