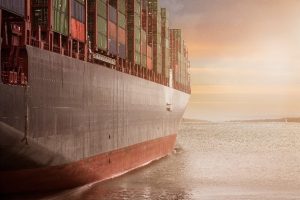 It’s been a decade since the shale gas boom started in the United States, positioning the country and its U.S.-based petrochemical companies as a top producer and one of the lowest cost players in the oil and gas chain. During this decade, many producers began planning and building new ethane/propane crackers to produce ethylene, mostly for polyethylene.

Even with a huge and dynamic domestic market, it would be impossible for the U.S. to fully consume this additional capacity.  As a result, all players are looking for markets outside North America as potential destinations for their production. One region that stands out as a potential receptor of a big chunk of this massive production is South America. Why South America?  It is a growing region with low per capita consumption, a net importer of polyethylene, and North American producers have logistical advantages when compared to other players like the Middle East.

While the potential for polyethylene in South America is significant, doing business in this region brings unique challenges. Companies looking to excel in the region need to consider the tough reality of the market and the unique requirements of our southern neighbors by taking a step back and analyzing each link of the supply chain. Successful companies need to study the nuances of the market, specifics of each nation and, most importantly, how people do business in these countries.

Specific to the production of polyethylene (PE), the important factors to consider include:

The infographic below summarizes the logistics steps for a producer or trader exporting resin to South America (or any other region in the world). After the resin is produced and shipped to the port of loading (e.g. Houston, Texas is the main shipping U.S. port to South America), experienced market knowledge becomes a key part of making the process successful.  When drawing the destination picture, at least seven options on how this product will be delivered in the country of destination is revealed. 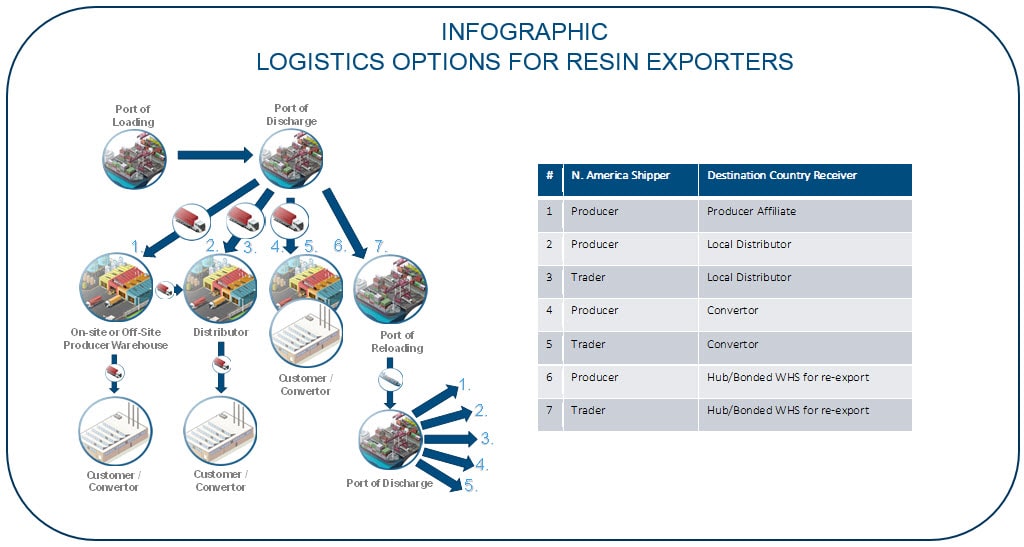 End-use and consumption patterns are unique to each country in South America.  Thoroughly understanding the opportunities for polyethylene exporters requires country-by-country data and analysis.

Why U.S. Exports to South America are Currently Slower than Expected

According to the International Trade Centre, from 2015 to 2019 exports of all types of PE from the U.S. to all countries in South America grew 10.0% annually.  This is approximately double to the overall PE market growth in the same period in the region, but still below the global U.S. PE exports of 16.6% annually. 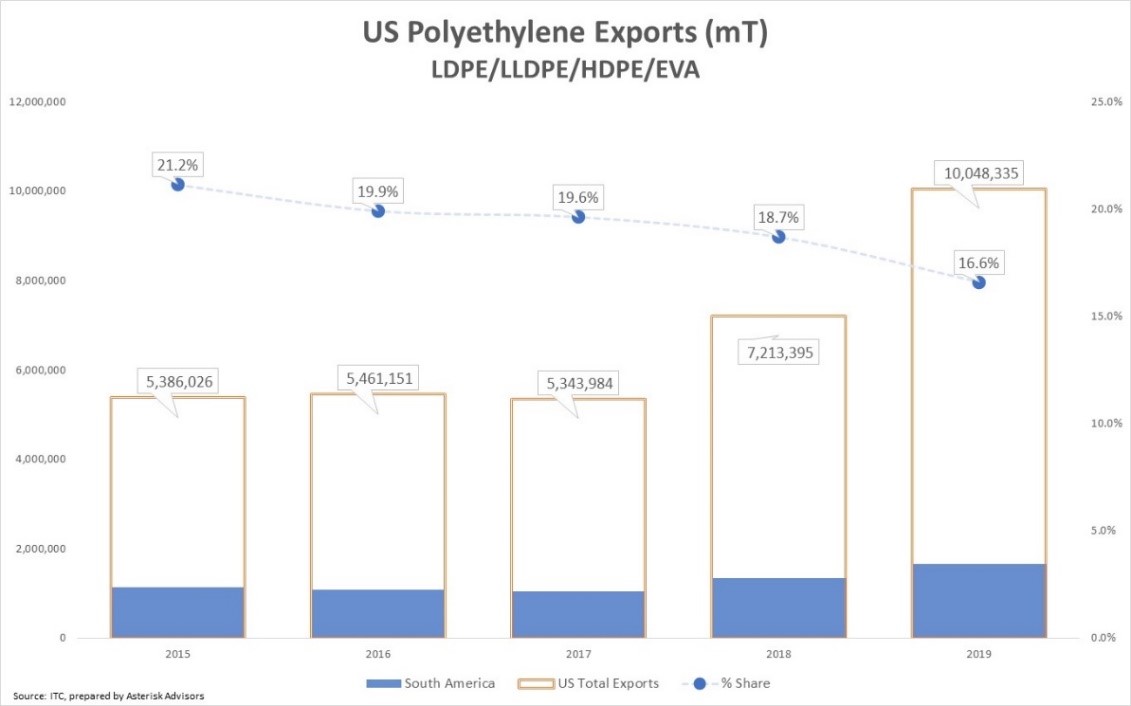 Why Such a Decline?

The PE market was already being affected by slower economic growth in South America and has been further aggravated by COVID-19, the US/China trade war, political and economic unrest in South America, including the countries of Venezuela, Argentina, and Brazil.

Additionally, in 2015 and 2016 Brazil faced a massive recession, with GDP decreasing 3.8% and 3.6% respectively. The country has still not recovered entirely, bringing the PE market to a standstill, recovering to 2014 levels only in 2018.

However, this downward trend seemed to change in 2020.  As Covid-19 ramped up and first affected China along with the continuing U.S./China trade war, PE exports from the U.S. to China decreased by 17.6% in the first four months of 2020 compared to the same period in 2019 despite total Chinese import growth of 18.8%.  With the U.S. being less competitive in the largest consuming market in the world, U.S. exports of polyethylene shifted rapidly and significantly to all other regions. Exports to South America jumped by 37%, now representing 18% of the total American exports of polyethylene. This growth in market share for South America, while large, is still below 2018 levels.

Capacity constraints in Latin America restrict imports from the U.S.  For example, Brazil has more than 11,000 plastic processors in the region. However, 94% of the companies are micro or small shops, and less than 5% of those 11,000 processors are responsible for almost 50% of the sector’s income. With the Brazilian market being the sixth largest PE market in the world, the number of companies capable of importing directly from any given international producer is small.  This is due to the hurdles and costs associated with the import process, including transportation, taxes, duties, letter of credit, exchange rate fluctuation, delays and inventory management.  Often these hurdles are too massive for smaller companies to overcome.

The processors that can import have a size and business structure that allows them to handle those issues, using imports as an alternative to the product bought from the local producers. Because of their size and consumption, these processors are a key partner to the local players as well, leading to an extremely competitive and tight market. 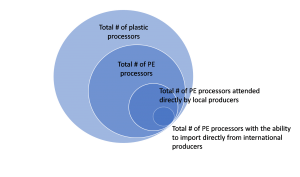 Some major global players, to better serve this type of client, are altering their business models by building local sales support in the region, including sales offices, warehouses, and financial/credit support, among other services. A large portion of the Brazilian market, and all other South American countries, is supported by distributors who can better serve the market with their infrastructure, regional warehouses, fractioning cargoes, and credit.  However, the primary distributors in the region also have long term contracts with those same major local producers. That leaves many main producers/exporters without reliable channels to distribute their product throughout the region.

Altering Business Models for US Producers/Exporters is Key to Success

When it comes to imports, the international producers are not able to reach this market with the same type of service as a distributor.  How does the producer overcome this competitive constriction?  By altering their business model and dealing with traders to better position its product in the South American market.  The major international companies need to better understand who and where they will be selling their product to and understand that not all traders have the same strategy.

Here are some examples and a supporting chart demonstrating how product flows once in South America:

Additionally, the U.S. PE plants who want to capitalize on this opportunity will need to map out a strategy to partner with these traders and find multiple destinations to secure that constant flow of product. 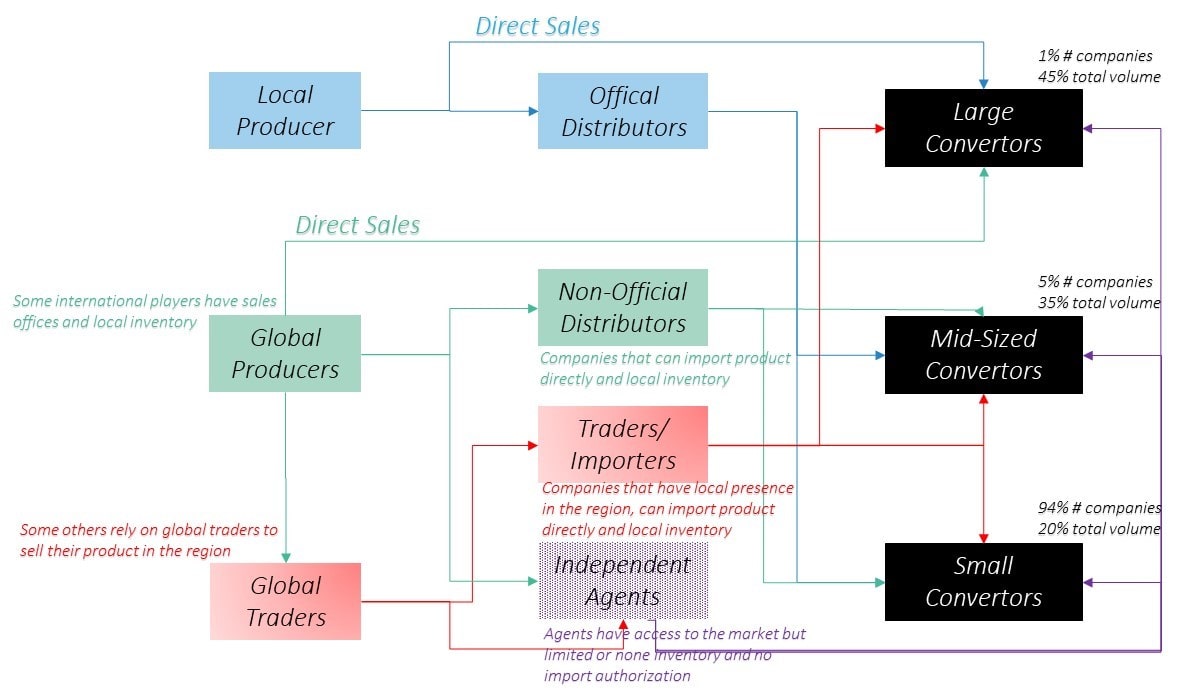 Indeed, shale transformed the U.S. as the most important PE player in terms of its market share, capacity, production and exports in the world. Due to the low cost of feedstock, it also gave these players a huge competitive advantage to better position its additional production across the world. However, having a good cost position is not the only factor that matters in South America.  Market presence, predictable supply, right product for the right application, marketing, distribution, services, and other business model factors are what make a company successful in the business of selling polyethylene. 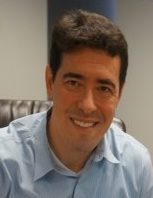 Roberto is an expert in the petrochemical and plastics industries with 20+ years of experience in marketing, strategy, and sales development. His business experience spans the globe with specific expertise in the Latin American market, having worked for one of the largest petrochemical companies. Roberto is well-versed in providing market analyses, pricing, trends and market drivers for petrochemical products and applications around the world.

January 10, 2022 Commentary: As Winter Shows, It Could Be Hard To Deliver Propane by Rail

As Winter Shows, It Could Be Hard To Deliver Propane by Rail So far, so good for propane distributio...