North America is about to have its first real transcontinental railroad – east-west and north-south. On March 30, 2021, Canadian Pacific (CP) and Kansas City Southern (KCS) announced plans to merge in a deal estimated to be worth $29 billion. If approved, the result could be a network that gives shippers single-line options to access salt-water ports as well as continental markets.

The merger of two of the smaller Class I railroads in North America will be a 19,200-mile end-to-end combination. It will touch the Atlantic and Pacific Oceans and connect Canada to southern Mexico. Given the lack of system overlap, the deal may have an easier time gaining regulatory approval. That opens the door for shippers to ask regulators for potential concessions such as reciprocal switching and to declare the Houston area open access to all railroads.

CP was the first transcontinental railroad in Canada. Its U.S. trackage is concentrated in the upper Midwest (serving the Bakken shale play and significant agricultural production areas, among other markets) and Northeast. Its Midwest lines serve Chicago and most critically Kansas City, its sole point of connection to KCS.  The KCS has a north-south alignment. Its north end terminates in Kansas City and St. Louis. The trunk line fans out when it reaches the Gulf Coast with one leg reaching the U.S.-Mexico border crossing at Laredo, TX. There its KCS Mexico subsidiary takes over. Its network has a main stem with several branches heading to the Gulf Coast. The bottom of the trunk forms an east-west oriented upside-down “T”. That line serves Veracruz on the Gulf Coast and the intermodal port of Lázaro Cárdenas on the Pacific. 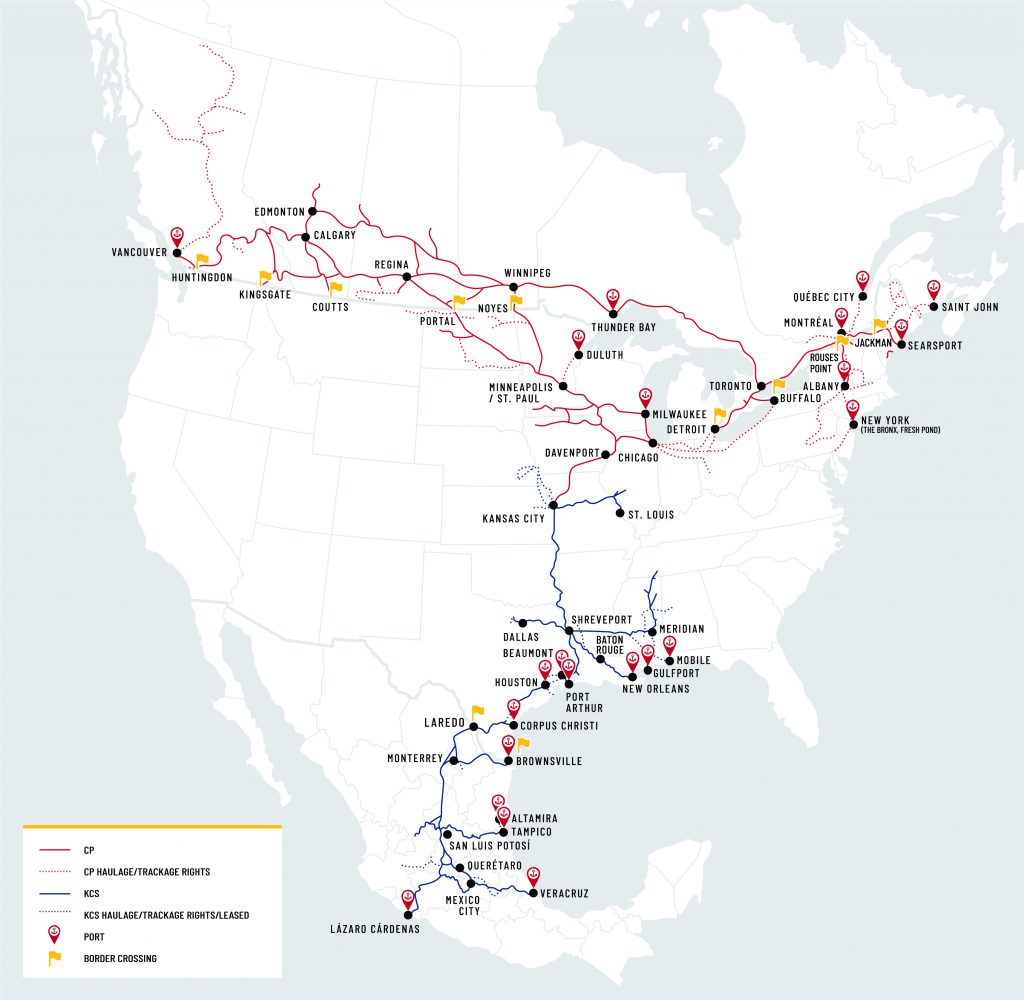 The merger’s implications could be immediately felt by shippers with continental as well as overseas international exposure. Lázaro Cárdenas is a deep-water port handling intermodal, dry bulk, and bulk liquids. The port has been expanding its intermodal operations – aiming to have capacity of 6.5 million TEU/year. It handled 1.24 million TEU/year in 2012. A merged CP-KCS would offer a single-line haul for Upper Midwest and Canadian Prairie ag customers to reach Mexico consumers and Gulf Coast export docks. And, the system will connect the petroleum and processing hubs of Edmonton, Alberta, the Bakken Shale, and the U.S. Gulf Coast. While pipelines will be preferred by this industry sector, rail could offer them competition under the right circumstances. If Houston should be declared “open” from a reciprocal switching standpoint, it becomes an advantage for shippers on this network.  A single network could also offer the opportunity for the auto industry to unify its production and distribution continentally.

North America’s Newest No Interchange, No Problem Rail Network North America is about to have its fi...