“Tank car leases trade like any other commodity.  They have up and down cycles.  As the nearby chart shows five-year LPG tank car lease prices are in a downtrend.  Long-term prices have been as high as $1000/car/month in 2019.  As of early January 2021, they were less than $600/car/month.  For shippers, that’s significant.  The cost of the car adds less than 2cts/gal to the delivered price of butane or propane.  It opens the door to using tank cars to store product ahead of the winter demand. 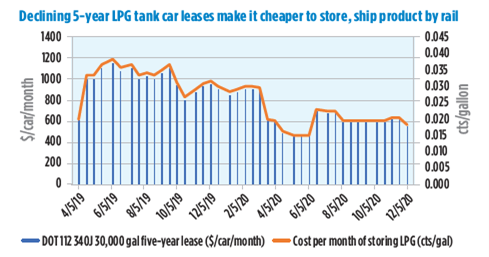 For lessors, the story is painful.  Those low rates represent a loss on capital and are a reminder of better days in the past.  What’s not known is where prices will go from here.  There’s not a lot of current shipper demand.  Even though these idle cars are costing lessors money, they aren’t happy at the prospect of signing a longer-term lease at lower rates.”